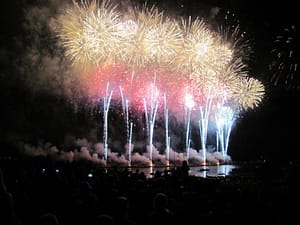 For the 26th year in a row, Harborfest remains “New York State’s Premier Admission-Free Festival.” While some Harborfest Oswego traditions remain the same, like The Entergy Grucci Fireworks Spectacular and fun and free concerts in the parks, there are some great new attractions in store for festival goers this year.

One great change that will take place this year is the Typhoon Tommy Jet Ski Show, which can be viewed from and is based at the River Walk West. While on the east side of the river the Juried Arts & Crafts venue will be bigger and better than ever with more vendors and more to see. The U.S. Coast Guard will also be offering an adult boater’s safety course at the McCrobie Building on Lake Street on Saturday, July 27th. While the class costs $35 to attend, there is no price tag you can place on being safe while on the water. The deadline for registration for this class is July 24th.

2013 is also the first year that two national recording artists are featured as headliners for the festival. On Friday, July 26th, Foghat will open for Blue Oyster Cult at the NRG Lakeview State at Brietbeck Park. Local and regional acts will perform throughout the weekend as well as tribute bands for Van Halen, AC/DC, and Neil Diamond. 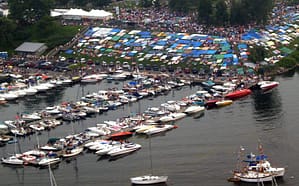 The Novelis Children’s Park in Franklin Square (also known as West Park) will be the second largest venue of at the festival in 2013. The Museum of Science and Technology (The MOST) from Syracuse and the Children’s Museum of Oswego will be stationed in the children’s park with fun and educational exhibits that coincide with this year’s “Science, Technology, Education, and Math” theme. SUNY Oswego has also stepped in with educational activities that the whole family will enjoy.

Harborfest works with and highlights many community organizations over the course of the festival. The Heritage Foundation of Oswego County’s annual Antique Show is part of the Trolley Stop route. The Oswego City School District is also a large part of this celebration. District art teachers, Melissa Martin and Becky Woods organize the programs that produce the yearly Harborfest poster, trolley buttons, event programs, and other artwork designs that are featured in the festival. An annual Children’s Musical, organized by retired teachers Rocky Farden and Bobby Palange, also takes place in the children’s park. “It’s gratifying for Harborfest to have these connections with the Heritage Foundation and the Oswego School District,” said Steve Pryor, Public Relations and Sponsorship Coordinator for Harborfest. 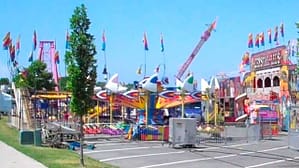 “Harborfest could not exist for twenty-six years without sponsors, business members , interaction between the city and county of Oswego and nearly 400 volunteers,” said Pryor. And he’s right, not many admission-free civic festivals have been around for over a quarter of a century, drawing attendees from all over the country.

For more information about Harborfest and community attractions, go to www.oswegoharborfest.com.