Skip to the content
Home > Ask Fitz! Insurance Blog > Is Your Chimney a Winter Fire Hazard?

Posted by FitzGibbons Agency on January 27, 2014 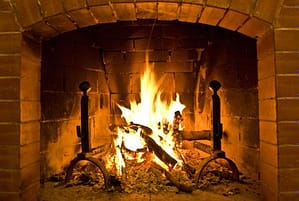 When smoke travels up a chimney, some of it condenses into creosote, which is a tar-like substance that will build up over time. The creosote sticks to the flue and creates a major fire hazard in the chimney as it builds up.

If a fire occurs in a chimney, there are extremely high temperatures that will cause the flue to crack. Any cracks in a chimney will create serious health threats for family members because of the carbon monoxide that is drawn into the home. This substance is normally supposed to be vented out through the chimney. It is a colorless and odorless gas that can be deadly for family members and pets.

Chimneys should be inspected professionally every year and should also be cleaned by a professional at least once every yea. The National Fire Prevention Association has created several layers of inspection, which resulted in the NFPA 211 code. It is a standard for fireplaces, chimneys, appliances that burn solid fuel and vents. The NFPA 211 is the standard that all certified chimney sweeps use whenever they are hired to clean chimneys. 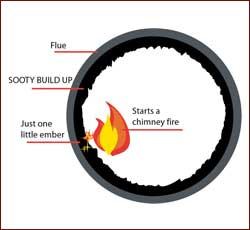 This level of inspection is recommended when a chimney is easy to access and the homeowner plans to maintain it as is. During a Level I inspection, the chimney sweep will verify that the structure of the chimney is sound and that it is also free of obstructions and creosote.

If a new heating appliance has been added or an existing one has been modified to burn a different type of fuel, the chimney must have this type of inspection. This level of inspection is also necessary after a property has been sold or if something happened that would have probably caused damage to the chimney. Level II inspections include the same points covered in the previous level as well as crawl spaces, basements and parts of attics. In some cases, this type of inspection may also include performance tests such as pressure or smoke tests. An interior video inspection of the chimney may be conducted if it is deemed necessary.

If the previous levels’ inspections result in the suggestion of a hidden hazard and evaluations cannot be performed without accessing areas that are concealed, this type of inspection is necessary. It verifies proper construction and conditions of any portions of the chimney and flue that are concealed. Level III inspections may be necessary if an incident damaged a building to the point its chimney had to be inspected.

Annual inspections are important, but it is also helpful to consider purchasing a metal chimney liner. These liners are designed to protect the inside of the chimney from corrosion, which is the result of combustion byproducts building up. Chimney liners are made from aluminum or stainless steel and may be use for repairing existing chimneys. These items are U.L. tested, so they are both safe and durable if they are installed and maintained properly. For chimneys over gas, oil or wood-burning units, stainless steel liners are used. Aluminum is only suitable for some gas applications. In addition to the liners, high-temperature insulation must be used to ensure safety.