Posted by FitzGibbons Agency on October 15, 2013

Neighborhood revitalization and restoration is at the heart of what The Oswego Renaissance Association is all about. They have partnered with both private and public donors to help make projects such as the Franklin Park Clean Up happen. 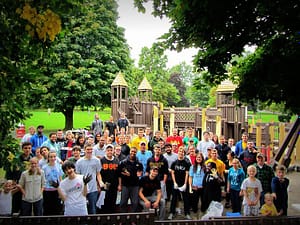 “Oswego is a city that is in a gradual process of renewal. You can see it if you know where to look,” said Paul Stewart, Director of the Board of the ORA. He sites the façade improvements of buildings downtown and the restoration of the Woodruff building and Stevedore Lofts as examples of how Oswego residents, businesses, and organizations are working to give Oswego new life through restoration.

The ORA works with the community using the Healthy Neighborhoods Approach, which builds upon the strengths of neighborhoods in Oswego, rather than focusing on the weaknesses. Resident leaders in neighborhoods around Oswego are helping to motivate their neighbors make positive improvements that will help make these neighborhoods go from “good” to “great.”

The most recent example of the ORA’s work is the clean up of Franklin Park, otherwise known as West Park. Over 90 community members, many of them SUNY Oswego students showed up to stain, paint, and restore the playground. The City of Oswego DPW helped with repairs to the playground and provided supplies for volunteers. The idea to restore the park was developed on a local Facebook page and was brought to life by the ORA and community members.

“We could not be prouder of our community,” said Stewart about the cleanup of Franklin Park.

Resident Leader, Steve Phillips, was the project coordinator for the cleanup of this beloved playground. “I don’t think I could be more pleased,” Phillips exclaimed about the outcome of the project. “Mayor Gillian, DPW Commissioner Mike Smith and his crew were great to work with and the volunteers, over 90 of them showed up and worked all day.” Volunteers included First Ward Counselor, Fran Enwright and his wife, Diane. 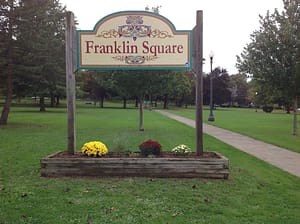 The hard work of the volunteers even inspired three of the park’s neighbors (Tanya Millar, Jackie and Courtney Pistorius) to go and buy flowers with their own money to plant in the two flower boxes around the signs for the park. “Those planter boxes hadn’t had flowers in them for many years,” said Phillips.

The next project that the Oswego Renaissance Association will be working on with the community and the City of Oswego is the West Bridge Street Tree Canopy project. Novelis Oswego has donated $25,000 to the project so that over 60 trees can be planted along West Bridge Street. The ORA already has a large number of community members (from SUNY, Novelis, and the City of Oswego) who have volunteered to help dig holes and plant the trees.

The ORA encourages community members to get involved and speak up about areas in our city that need help and revitalization. “One of the greatest things we have learned is that if you simply tell someone there is a problem and ask them to fix it, it may take a while or never get done. But if you bring something to the table to help “fix” the problem you engage people.”

Working side-by-side with your neighbors to help make something beautiful again is something that the Oswego Renaissance Association takes pride in. “The success of a city, its government, its schools, its downtown all depends on the health of it’s neighborhoods,” said Phillips.

“Our mission is nothing less than to make Oswego’s neighborhoods great again,” said Stewart. “ If you know where to looks, some are on their way already. There are great things ahead for Oswego – we just need to reach for them.”

Anyone in the community can become involved with the ORA. Those interested can submit a request on their webpage, www.oswegonyonline.com and someone will contact you about involvement. Volunteers are always needed to help with projects. 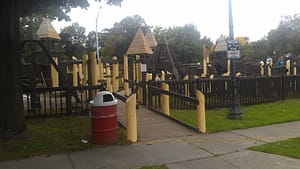 All photographs used in this article as well as in the video were taken by Luann Knight Photography.